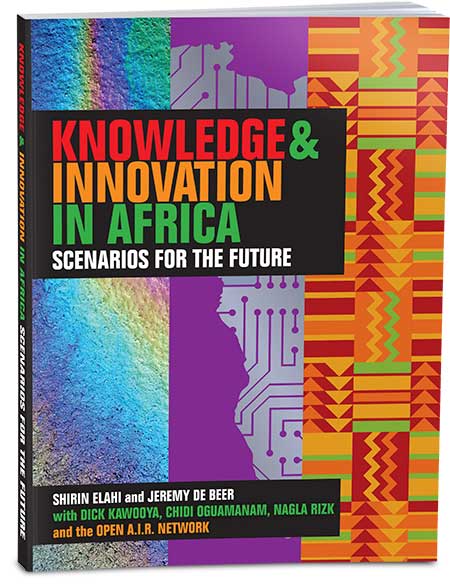 By: Shirin Elahi and Jeremy de Beer, with Dick Kawooya, Chidi Oguamanam, Nagla Rizk and the Open AIR network
Publication Date: 2013
Download: Knowledge & Innovation in Africa: Scenarios for the Future
Purchase: To purchase hard copies or to order an inspection copy for consideration for use in a course curriculum, contact Open A.I.R. Project Manager Nan Warner.

This 2013 book is the product of three years of literature reviews, expert interviews and scenario-building exercises by the Open AIR network.

The authors trace the contours of knowledge and innovation in Africa from the founding civilisations to today’s current realities, and then set out the drivers of change that can be expected to shape innovation systems on the continent between now and the year 2035. The volume then offers three plausible scenarios – elements of which are likely to emerge in various settings on the continent in the short- to medium-term. Each scenario raises different issues for control of, and access to, knowledge in Africa.

The key insight for policymakers, business leaders, scholars and civil society is that the question is not whether intellectual property (IP) rights will be relevant in the future, but rather which rights will be most important in different scenarios.

The first scenario, entitled “Wireless Engagement”, suggests a world where formal African enterprises are widely interconnected with the global service economy and IP protections are largely standardised, via copyrights, patents, trademarks and industrial designs. The result of this standardised framework is preservation of existing forms of business relationships based on the protection of proprietary rights, and maintenance of an environment attractive to foreign direct investment. While this scenario is one of innovation and economic growth in African settings, it is also a scenario in which access to technology and education becomes crucial, and Africans lacking this access may be unable to enter, compete in, and benefit from, the increasingly formal, globalised economy.

The second scenario, “Informal – the New Normal”, is one in which improvisational, small-scale enterprises in Africa thrive through informal knowledge governance based on informal IP mechanisms such as trust, interpersonal networks, customer loyalty and first-mover advantage. This does not mean, however, that the formal economy is eliminated in this scenario. Instead, many formal business structures cooperate with, and behave as support structures for, their informal peers. Formal actors demand informal goods, provide skills and capital to the informal economy, and serve as trusted conduits for state support.

The third scenario, “Sincerely Africa”, is one in which African innovators increasingly tap into traditional knowledge (TK) and inter-generational cultural practices. African innovators in this scenario gravitate towards culturally grounded IP structures, such as TK commons arrangements, in response to the need for sustainable resource management in the face of growing environmental problems – and to guard against misappropriation of their TK and undermining of their biodiversity.

The book is in full colour and richly illustrated with maps, charts and photos.

Watch our feature video on scenarios from this publication.

What are the Questions?

Appendix: A primer on innovation and intellectual property