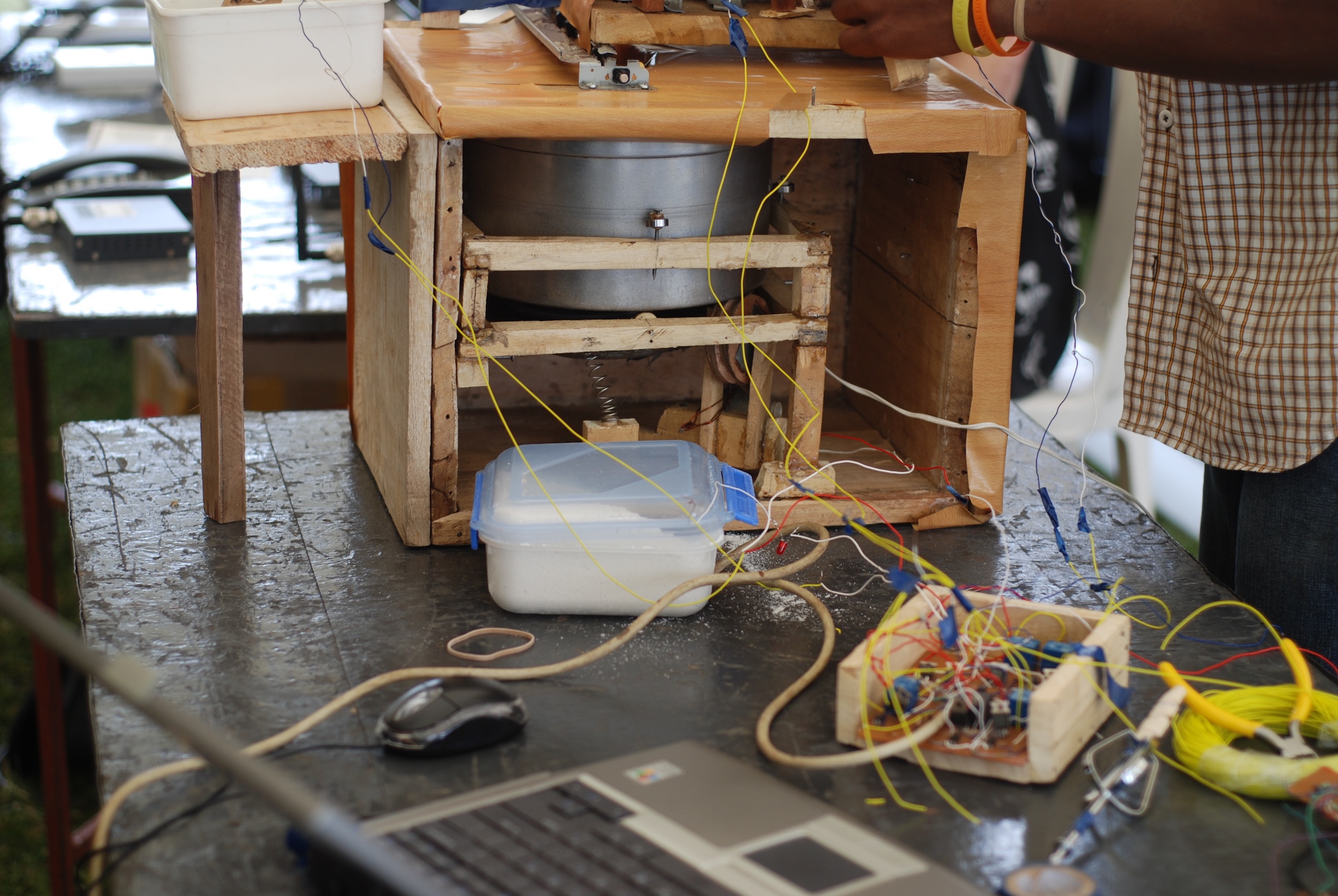 In the past few years, there have been several initiatives to help entrepreneurs introduce new creative and innovative products that break from prevalent manufacturing models. This is particularly the case given the growth over the past two decades of industrialization to a global scale for the manufacturing of consumer goods, notably in the digital electronics arena.

Some maker spaces have addressed this by making space available for people to utilize some tools and machinery to tinker and create their own products. The aim is to create an environment in which the process of building and creating can eventually lead to innovative high-tech products. Traditional literature refers to maker spaces as institutions that help to spread the culture of creating, as well as to boost new potential startups.

The intellectual curiosity on how products are made combined with the existence of more portable equipment such as 3D printers and laser cutters has led to the growth of maker spaces, born to provide a collaborative work space with access to equipment, ideas and collaborative project and product building.

One such area of innovation is to open spaces to find smart solutions with limited resources and to maintain and repair technological devices, which are overlooked aspects of technology, with many people forgetting that innovation is only a small part in the life cycle of technology (https://aeon.co/essays/innovation-is-overvalued-maintenance-often-matters-more), and that maintenance, repair and efficient use of resources are also innovative activities.

One of the barriers to setting up a maker space is the lack of access to financing. This is especially evident in economically challenged contexts, where maker spaces usually lack sufficient funds to purchase needed tools or equipment or sometimes even the overhead required to keep them open.

Reuse is one way to circumvent financial obstacles for maker spaces. In Nigeria for example, many public libraries already struggle to find funding to maintain basic library operations (http://www.emeraldinsight.com/doi/full/10.1108/NLW-05-2016-0038), let alone money to expand their library to include a maker space. One of the ways this was overcome at the University of Nigeria in Nsukka was to use surplus furniture from what remains unused within the university (http://www.emeraldinsight.com/doi/full/10.1108/NLW-05-2016-0038). Another way to help reduce costs was to include old discarded IT equipment that would have otherwise not been used due to it being obsolete, instead of purchasing new devices.

But reuse can represent more than just a circumvention tool for financial challenges. In certain contexts, maker spaces have an added benefit because they help repair or improve products, rather than creating new ones (http://steps-centre.org/2016/blog/makerspaces-creating-inclusive-spaces-for-sustainable- innovations/), which escapes the traditional definitions of innovation in developed markets that are obsessed with creating new products, while discarding old ones. This banks on a reuse habit that is centered on extending the lifespan of products. The benefits of this approach go beyond the convenience of having products repaired; and allow people to have more control over their electronic devices for a period longer than what the manufacturer intended (http://steps-centre.org/blog/makerspaces- creating-inclusive-spaces-for-sustainable-innovations/) which constitutes technological citizenship.

Financial challenges for maker spaces are typically associated with the purchasing and maintaining of 3D printers, which have been nearly synonymous with modern day maker spaces since they allow a rapid prototyping where an idea can be turned into a physical prototype within hours. 3D printers can be extremely costly, especially, for a maker space with limited access to funds. Within a developing country context, 3D printers are costly when they are imported, especially when there are currency fluctuations that cause price shocks. There are also costs associated with product maintenance and purchasing support material. This high cost does not only represent the cost of production of the equipment, but also the high Research and Development costs and those of intellectual property licenses behind these 3D printers.

In order to circumvent this, makers have had to resort to open source hardware, which is a cheaper and more sustainable avenue.

An example is ATOM, a global initiative to spread 3D printing and linked with various start-ups worldwide. One of its affiliates is Atom 3D Printers (https://www.facebook.com/atom3dp.egypt/), an Egyptian start-up located in Alexandria. ATOM promotes building open source 3D printers from designs freely available from the Internet. They have also published a step by step guide on building these 3D printers for free on their website (http://www.atomegy.com/). The company sells packages, which include all components and materials that are needed for the assembly process, but also offers to sell an already assembled version (https://3dprint.com/25029/atom-3d-diy-extruder/). The relatively simple process of assembling the printer also makes it easier and cheaper to seek repairs domestically compared to dealing with a corporate customer service agent.

Another initiative, RepRap, launched at Bath University to create a more sustainable maker space environment for 3D printers (http://reprap.org/) by producing a modular plastic-based printer device. RepRap publishes all the software, design and documentation regarding its 3D printer on a free Wiki page for anyone around the world to build. What is unique about the RepRap printer is that it can print out many of its own spare parts and components. RepRap hopes to develop a 100 percent sustainable 3D printer that will be able to print components to produce other printers, which it dubs as “child printers”.

In Egypt, Imonhotep Medical Solutions (https://medium.com/make-and-maker-faire/young-makers- on-the-rise-in-egypt-3a0c555d08bf) is a company that turns X-rays of organs into 3D printed models. This allows surgeons to study organs in their physical form so they can better plan on how to perform surgery on them. These 3D prints are more useful as they give a better visual insight compared to 2D scans. The start-up was founded by a medical doctor who was a frequent visitor at Fab Lab Egypt, which is part of MIT Fab Labs (http://fab.cba.mit.edu/about/faq/), a global network of maker spaces headquartered at the Massachusetts Institute of Technology, providing access to tools and equipment for innovators. A company such as Imonhotep would have traditionally had to have the backing of vast sums of investments in R&D and equipment, which is difficult to find in the volatile economic environment of Egypt. In this case though, Imonhotep had access to many of the tools in the makerspace, which offered them capital intensive means of production for the price of a monthly fee instead of seeking large investors. The open space provided by Fab Lab not only helped by providing the tools and equipment, it also helped this start-up by connecting the founders with legal and financial consultants to develop a more solid business plan, making it easy to recruit potential investors.

Another challenge faced by these maker spaces is the initial attraction of users. For example, a maker space initiative set up by the Innovation Center Vila Nova Esperança (https://www.globalinnovationexchange.org/innovations/innovation-center-vila-nova- esperan%C3%A7a-ic-vne) in several favelas in Brazil noted from their experience that there was a low attendance rate because many of the potential makers were intimidated by the expensive high tech tools. Most had assumed that they would not know how to use them, or were worried that they would damage the equipment. In order to alleviate these fears, the maker space came up with a strategy: to achieve a high rate of participation and traffic, their space was initially furbished with more basic, cheaper, simpler low-tech and more familiar tools. This was more likely to attract new people who were less intimidated by the thought of experimenting with these tools. This strategy also helped to create a community around that space, leading to increased traffic. Newer tools were then added partially after listening to the specific needs that some makers expressed.

Another issue faced by the same organization was that they noticed many makers tended to have low- confidence despite being extremely skilled. One of the suggestions was to put less emphasis on rigid formal workshops, and focus more on informal workshops. Formal lectures tended to be more intimidating and prevented people from unleashing their skills to make creative products, out of concern that they would be judged. In this space, makers created the best products when they felt they were not being examined, and when they could produce what they wanted.

Meanwhile, a unique benefit of maker spaces is that they help entrepreneurs move into the formal sector. A maker space can provide a space for those working in the informal sector to create their product and provide support, which government institutions have neglected. Beyond just giving access to tools, these spaces can help accelerate a small business into a formal business, by giving legal support and training. While some maker spaces are aimed at attracting those with a formal educational background in science and engineering to experiment out of intellectual curiosity, others provide vocational training and skills- based training that help people with less access to formal education.

More broadly, maker spaces in less digitally advanced contexts, where there are less commercial workshops selling or renting 3D printers and scanners, play the role of introducing digital technologies, advertising their benefits and providing training. Thus, these spaces provide equitable access to technologies, narrowing the digital divide. In turn, this can allow new makers and potential entrepreneurs to produce outputs that can compete more in the global digital economy.

But even if maker spaces manage to overcome the initial financing challenge, their success can be threatened by the overall economic context. For example, ICE Labs is a makerspace located in Egypt focusing on green technologies, with several branches across the country (http://www.icecairo.com/). The spaces provide co-working areas along with access to the usual maker space tools, as well as workshops on how to use these tools and online tutorials for those unable to physically attend. For example, ICE Fab Lab, a maker space owned by ICE Cairo had to close down due to soaring maintenance costs in light of the recent depreciation of the Egyptian pound (http://www.businessinsider.com/egypt-unpegs-the-egyptian-pound-from-us-dollar-2016-11). Currently the ICE Cairo organization is looking for ways to re-establish its maker space.

Yet, despite all challenges faced, maker spaces can cause and reap a wide range of gains for and from creators. These include the highlighting of reuse and repair as key technological activities, the contribution to open-source innovation, the training and the boosting of informal production processes. In fact, some of the challenges faced by maker spaces represent none other than their tools innovation.