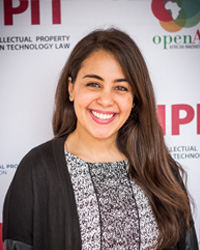 Nagham ElHoussamy pursued her undergraduate studies at the American University in Cairo (AUC), and graduated with a BA in Political Science, specialising in International Law and International Relations with a minor in Economics. Upon graduating in 2009, ElHoussamy started work as an Economic Researcher in the Macro-Fiscal Policy Unit at the Egyptian Ministry of Finance, while simultaneously pursuing her graduate studies. She recently completed her MA in Economics in International Development at AUC. While studying for her Master’s, El Houssamy also did an internship at the ICT Policies Unit of the United Nations Economic and Social Council for West Asia (UN ESCWA) in Beirut. She joined Open AIR in 2012 and was the NERG Ombudsperson in 2015–2016.