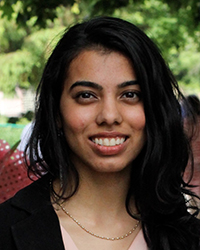 Vipal Jain is currently a Juris Doctor (JD) student at the University of Ottawa. She holds a Bachelor of Science from the University of Toronto, where she specialized in Genetics and Biotechnology. Prior to attending law school, Vipal worked in several academic research labs conducting research in diverse areas such as genetics and global health. More recently, she worked at Synbiota, a Toronto-based startup that develops new tools for biotechnology by integrating software and wetware. She is an active proponent of technology democratization and has hosted panel discussions about open data and open access at DIYbio.TO, a biology hackerspace in Toronto. Vipal has also won a number of academic awards and is a successful writer who has appeared in The Toronto Globalist, The Varsity, and The Toronto Star. Vipal is interested in the future of emerging technologies and how the law can shape the dissemination of knowledge and access.