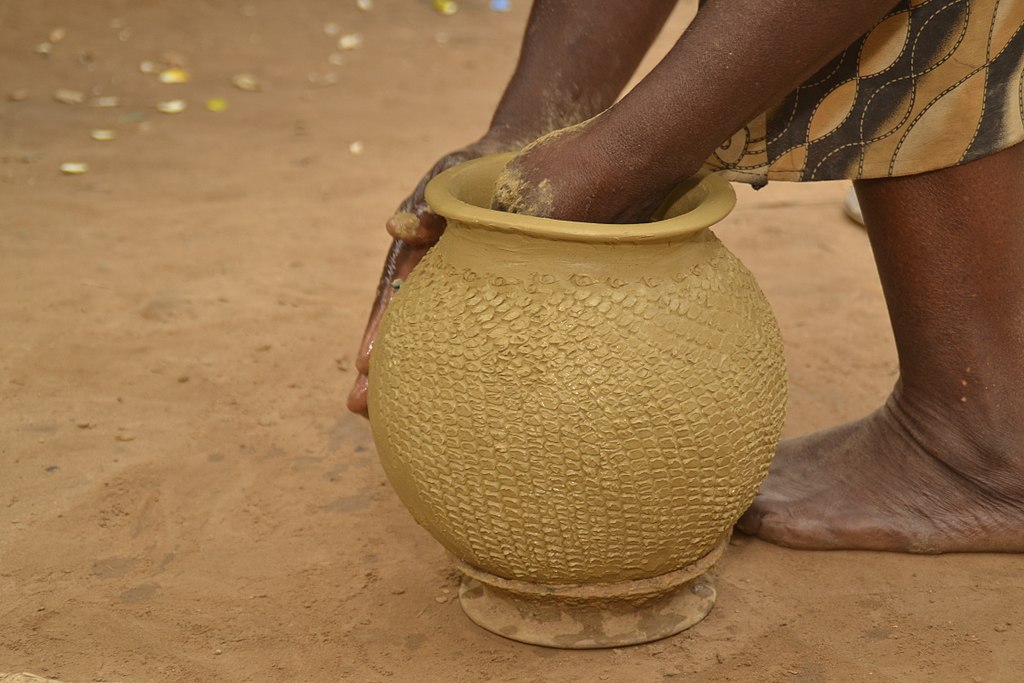 Pottery is an ancient art in Nigeria and is practiced in different parts of the country. It has high value for the tourism industry as it projects the artistic culture of Nigeria. In various cultures throughout Nigeria, as well as many other parts of Africa, pottery has been the exclusive reserve of women. Their products and traditional making processes have been able to survive the changing times of the industrial world because of their relevance.

The art is highly respected both within Nigeria and abroad. For example, the late Nigerian potter, Ladi Kwali, was known for making beautiful pots with high aesthetic and economic value. She was an iconoclast in pottery and received national honours as well as an honorary degree (Doctor of letters). Further, her art has been memorialized on the 20 Naira note (Nigeria’s national currency). This is a remarkable honour for recognising the traditional art and women in indigenous entrepreneurship. This relates the important contributions rural women have brought to the society.

As an Open AIR QES Fellow conducting research into gender innovation and indigenous entrepreneurship and development in Africa. The research involves a comparison between my home country of Nigeria, and the place of my QES Fellowship, Kenya. The aim of my research is to boost the empowerment of rural women by expanding their assets and capabilities to participate in, negotiate with, and influence and hold accountable the institutions that affect their lives. Improving the status of rural women in Africa is imperative because of their lack of opportunities for education and employment. Pottery is an important mechanism that facilitates social and economic independence for African women. To do this, women and men need to take proactive measures in the areas of:

Many students and other scholars have asked me what it entails to conduct such research. My team and I began our research in the village of Wanune in Benue state, Nigeria. The village is remote, with poor access roads, so we had to bike for about 11 kilometres or over 40 minutes. In Wanune, women and girls of the Tiv ethnic group make up a hub of local potters who have created a livelihood out of this art and craft. The pottery site in the ancient village of Gungun, seems bizarre and abandoned, a settlement in the heart of the village, a prospective tourist attraction found in the midst of a beautiful array of red earth and clay, surrounded by lush green vegetation.

Having already received permission and being welcomed into the community, my team and I began to set up focus group discussions. Being the facilitator, I briefed the women on my research and my inquiry into the role of women in development. During these focus group discussions, communication was in the local language, Tiv, mixed with English language. I was impressed by the high level of participation and enthusiasm displayed by the women and have no doubt that much of this was because we engaged them in their local language. At these discussions, my research team and I collected data by taking notes, recordings, photos, and videos.

What questions did I ask and what have been the most illuminating responses? Here are some of my questions and some of the most revealing answers I have gotten so far.

Society looks down on us as a people with no occupation; a people who are worthless.

The advancement of women is an important and strategic issue not only because of their central roles in reproduction, to ensure continuity and survival, but also production for the growth and development of society. The women contribute immensely to the well-being and economy of the family. We are agrarian, as agriculturalist, we engage in farming activities. We are also in team labour and we have organised a local contribution scheme for ourselves called BAM or ADASHI to enhance funding opportunities or otherwise at the rural level. We combine motherhood, wife, craft, agriculture, trade and commerce.

No, our husbands do not ask us to remit our finances to them. We have the freedom to control our finances, we only support them accordingly and at the end of the day they are proud of us.

It is a source of livelihood even though there are no high market demands. I testify that it has been used to pay our children’s school fees. One of our members has used the proceeds from pottery to pay dowry in honour of her son, who got married recently. The proceeds are also used to purchase fertilizer for farms. One woman stated that even when her husband had farmed, they did not have a good harvest and it was the money she made from pottery that sustained the family. Some persons were devastated and stopped the art because people within the community look down on the profession but I continued. They call us names while conveying our products to the market. Names like “Agundu”, literarily ‘hunch back people’, because sometimes we carry them on our shoulders, and “ground sitters” because we sit on the bare floor while processing our clay. Some people have stopped going to sell their wares at the local market and prefer to take them to Igbor Market, which is quite a distance and a cost for us.  The irony is that many of the people, especially the men who make jest of us, must buy our pots when they need to take herbs because all traditional herbs are boiled in earthen pots before consumption.

There are very simple patterns from pre-historic times and the trend has been followed untill modern day. However, new patterns have evolved, to add to the aesthetic value of the wares.

The young girls are picking up the art very fast. They even produce more pots than we, the elderly women, do! This is very interesting because the art and culture will not die but live forever. For us, it is a heritage that is passed from generation to generation.

Finally, as always happens in research, some participants shared stories and information that was not in answer to a specific question. Some of these have been just an insightful as the “answers” to my questions. For example, one woman stated that, initially, the government was collecting taxes from them of about 1500 naira weekly. The local chief then intervened and stopped the tax collection. The women I spoke with said that this was a relief because their pottery is not yet a large enough industry to generate such huge revenues.

Women through time have been the custodians of culture, which is a living and dynamic body of knowledge and needs to be carefully nurtured. Without this nurturing, it may degenerate, petrify, or even go extinct. While such cultural knowledge is most often valued in literature, art and craft is also cultural preservation. Literature, in the local language, teaches people to understand their world since it communicates directly with the local environment, thereby acting as a mechanism for cultural safeguarding. Equally, a mother delightfully singing lullabies to her child is often transmitting traditional knowledge about farming, warning of weather patterns, and documenting the history of rain and sunshine. In this way, women have succeeded in preserving culture by transferring this knowledge from one generation to another. Pottery is just one more means by which women are preserving their indigenous cultures.