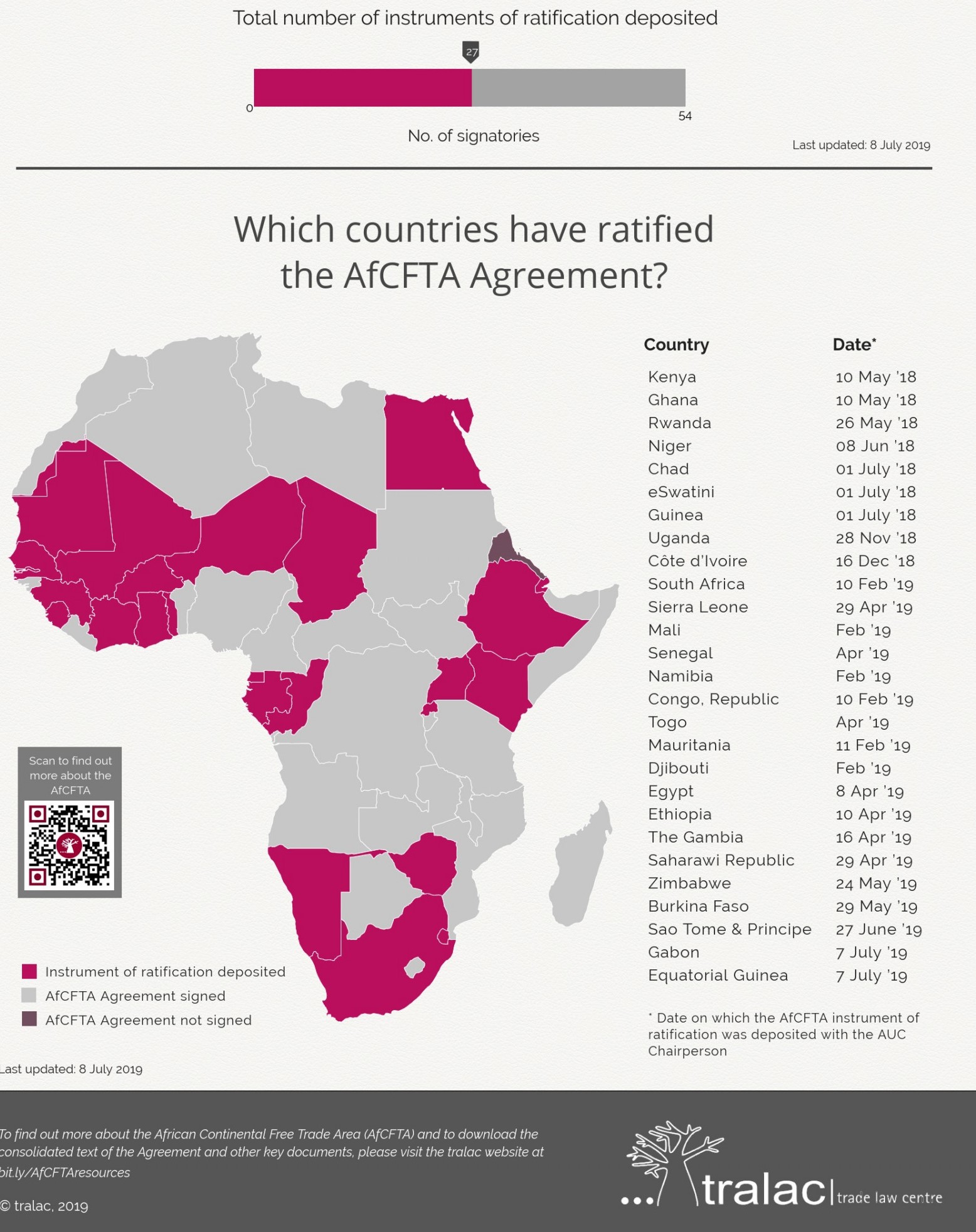 In March 2018, the African Continent Free Trade Agreement (AFCFTA) was unveiled as the world’s largest free trade area since the creation of the World Trade Organization (WTO) in 1994. The AFCTFA gathers 54 countries in a single market of 1.2 billion people, with the total GDP of the AFCTFA member states combined being about $2.5 trillion. This agreement will be important in paving the way to develop more trade between the African member states, which is currently at only 17%. This is compared to intra-regional trade in other continents of 59% in Asia and 69% in Europe.

According to the Trade Law Center (TRALAC) in South Africa, 54 African countries are signatories of the AFCFTA, Eritrea is the only country that has not yet signed the AFCFTA. As shown in the infographic, as of July 22nd, 2019, 27 of the 54 countries have deposited their instrument of ratification for the AFCFTA.

The Prominence of AFCFTA

The AFCFTA is very important for a continent that struggles to eradicate poverty. The agreement could be another step in the right direction by eliminating tariffs and trade barriers, which will increase trade and thereby have a positive economic and social impact on the member states. It is worth mentioning, however, that this agreement is not the first trade agreement among African countries; there are several other regional free trade agreements within the continent. For example, COMESA in the east and south, SADC in the south, ECOWAS in the west, AMU in the north, ECCAS in the centre, EAC in the east, and other different free trade agreement. In fact, the AFCTFA is the first free trade agreement that will cover the whole continent, bearing different interests and concerns in mind.

In May 2019, the International Monetary Fund (IMF) issued an extensive working paper showing the potential benefits and barriers of the AFCFTA.  It also proposed a road map for the AFCTFA’s success. According to the IMF, one of the main obstacles faced by the AFCFTA, is how to reduce non-tariff trade barriers (NTBs) between member states. These NTBs include, among other things, infrastructure gaps and the need to improve formal business environments.

Meanwhile, the UN Economic Commission of Africa (ECA) recently predicted that by 2020 that intra-regional trade among member states could increase to 52.3%. This will have a positive impact on African economic growth and could be a potential for further developments in the relevant legal and social frameworks. It is my hope that this agreement will help to promote innovations and encourage African entrepreneurs by providing easy access to new markets.

Phase II of the AFCFTA is now under negotiation. This phase will include competition and intellectual property. As Open AIR knows, this phase is delicate, especially since any negotiations related to IP must take into consideration that significant innovations in Africa are taking place in the informal sector. In addition, innovations in Africa are frequently using reverse engineering to produce imitated products in order to help their local communities. This then often becomes an iterative process of innovation, though it also means that the there is less consideration of IP rights and enforcement.

The proposed positive economic impacts of the AFCTFA will be achieved if the member states have the courage to overcome any existing or upcoming conflicts of interests that could lead to barriers and disputes between member states.  They need to understand that the success of the AFCTFA could have significant direct and indirect economic and social impacts on the future of Africa. Incoming generations of Africans will benefit from their integration more than separation and isolation.