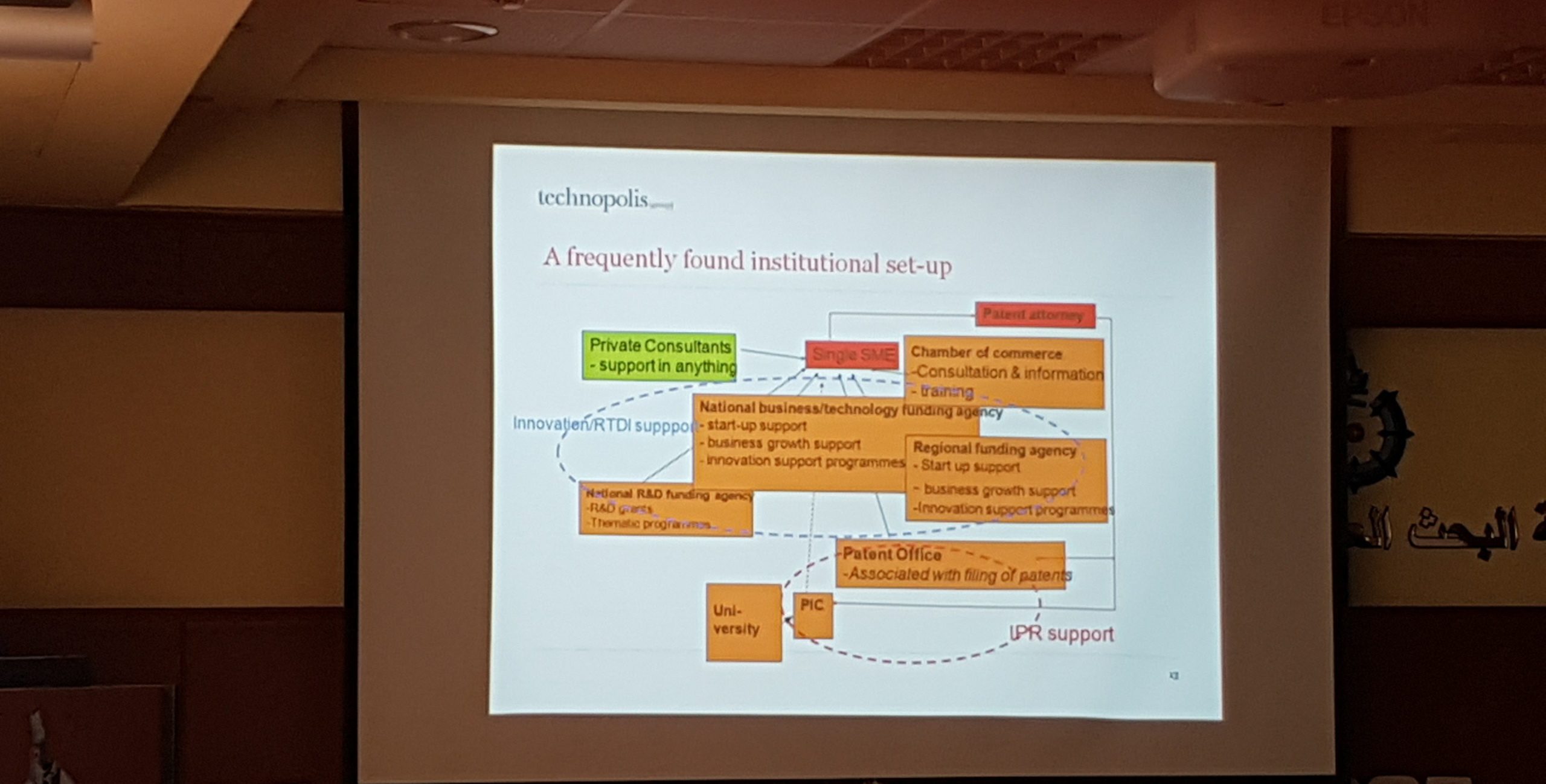 Earlier this year, the World Intellectual Property Organization (WIPO) held a two-day workshop on “Supporting Small and Medium-Sized Enterprises Use the Intellectual Property System in Their Competitive Strategy” at the Academy of Scientific Research and Technology in Cairo, Egypt, which some of our Open AIR NERG members attended. The goal of this meeting was to discuss how to encourage young innovators to protect their inventions by patenting them at the Egyptian Patent Office. The workshop had vibrant and sometimes heated discussions between these innovators and government officials regarding many of the obstacles faced in the patenting process in Egypt.

About the WIPO Workshop

There were notable key presenters at the workshop such as the head of the Egyptian Patent Office, Adel Ewida, and the CEO of Vision-IPR, an Indian IP consultancy firm, Prabuddha Ganguli. The workshop was attended by various academics, scientific researchers, industry professionals, entrepreneurs, and IP lawyers as well as two Open AIR NERG Fellows, Mohamed Hosny and Mai Al-Khamisi.

Our NERG Fellows found the discussion useful as it provided an opportunity to learn how the Egyptian Patent Office helps tackle the issue of intellectual property, while comparing the experiences of India with Egypt. One of the major themes discussed were the misconceptions held by many entrepreneurs, particularly in Egypt, regarding the issue of the application of IP. All the speakers felt that these misconceptions are likely harming various Egyptian innovators, leading them to take harmful decisions regarding IP, based on incorrect assumptions.

According to Ganguli, one of the major misunderstandings regarding IP in developing countries is that many people use the terms “copyright”, “trademark”, and “patent” interchangeably. Patents are broader and relate to new inventions, concepts, or original ideas, rather than actual content. For this reason, they must be filed in order to provide proof of the novelty of the invention. Meanwhile, Ewida pointed out that this misconception causes many business owners to be unaware of their legal rights, especially in terms of whether their products are protected or not. At Open AIR, our initial interviews from the case study on high technology hubs in Egypt show similar results; with entrepreneurs lacking awareness about the different forms of IP that exist.

Ewida conceded that in Egypt, conditions for patent filing are not widely communicated by the government. Many innovators do not file patents until they have fully working products to demonstrate, even though patent offices usually only require a general draft on how the idea will be implemented. Similarly, many inventors do not realize that protection for patents usually applies on the date of the filing, rather than the date of approval. Both misconceptions lead to inventors delaying their filing, which increases the chance of others, including patent trolls, counter filing.

Another misconception pointed out in the workshop was the notion that multinational corporations file international patents to be protected worldwide. Many innovators attending the workshop had the misconception that WIPO legally enforces patents on all its members. This leads to many smaller startups being reluctant to develop new products, believing that it will be impossible to compete globally with larger multinationals who have global patent networks. Both presenters dismissed this, saying multinational corporations only patent within their country of operation, rather than globally.

In contrast, Ganguli showed that several Indian startups have been successful by building on inventions patented in foreign countries, and then selling them domestically in India, where no patent has been filled. He pointed out that several Indian startups have built and sold products based on patents in the US patent office. These products were later patented in India by those startups. While this business model has been proven to be occasionally financially successful, many innovators attending the workshop reacted with skepticism, claiming that it encourages copycatting rather than innovation. Ewida countered this argument by pointing out that such a model can help developing countries by building upon already existing ideas.

According to Ewida, there is also the misconception by Egyptian innovators that filing for patent protection is expensive. While it is true that multinationals and large corporations – as opposed to early-stage entrepreneurs – file most of the patent applications received by the Egyptian Patent Office (EPO). In reality, for smaller startups and individuals, filing a patent in Egypt can cost as little as 150 Egyptian Pounds. This is because the Egyptian government and the Egyptian Patent Office worked jointly to introduce tiered prices according to business size, in order to better facilitate smaller players in protecting their innovations. In addition, many research institutions and universities in Egypt also offer to pay for a portion of patents filed by innovators undergoing research in science and technology.

While the information from Ewida is generally accurate and in accordance with our findings, we have found there are also many hidden costs involved with filing a patent in Egypt. For example, patents need to be produced in a specific legal format and often require highly technical terminology to be translated into Arabic. These requirements usually require skills which we are also finding many innovators and early-stage entrepreneurs are unfamiliar with. This was echoed by others in the workshop, where many entrepreneurs mentioned that they have no legal background or the resources to hire someone to help them file a patent. Our preliminary research findings also point out, that in the medium and longer term, innovators may face additional legal costs when prosecuting against patent violators. Indeed, since many startups do not understand the full legal process, they may end paying for unnecessary legal paperwork. Furthermore, passive enforcement means startups have to actively defend their patents to ensure the government is taking action. All these factors result in a higher average cost of patent protection by smaller startups, compared to larger corporations. Moreover, these legal fees can arise early in the product development lifecycle, before product sales and revenues come in. This places an added strain on the cash flow of startups, giving them a competitive disadvantage against larger corporations.

The workshop concluded that several recommendations and solutions could help in debunking these misconceptions. The main takeaway that Ganguli proposed is a shift in the patenting process that could use consulting companies as intermediaries between innovators and the patent authority. These companies would act like a bridge, to help connect inventors and startups to government patent offices. They would also help to prevent and correct misinformation by better communicating with innovators rather than them trying to figure out government bureaucracy on their own. These companies would also likely manage their legal resources more efficiently than startups, thereby reducing the cost of protection.

The EPO has collaborated with WIPO to introduce introductory courses to help innovators understand the basic operations of IP. This being said, it was clear by the end of the workshop that many of the misconceptions mentioned were but one of many obstacles that prevent innovators from patenting their ideas. The vibrant discussion at the workshop also showed the need for more workshops, which are planned to happen on a more frequent basis in order to monitor progress.