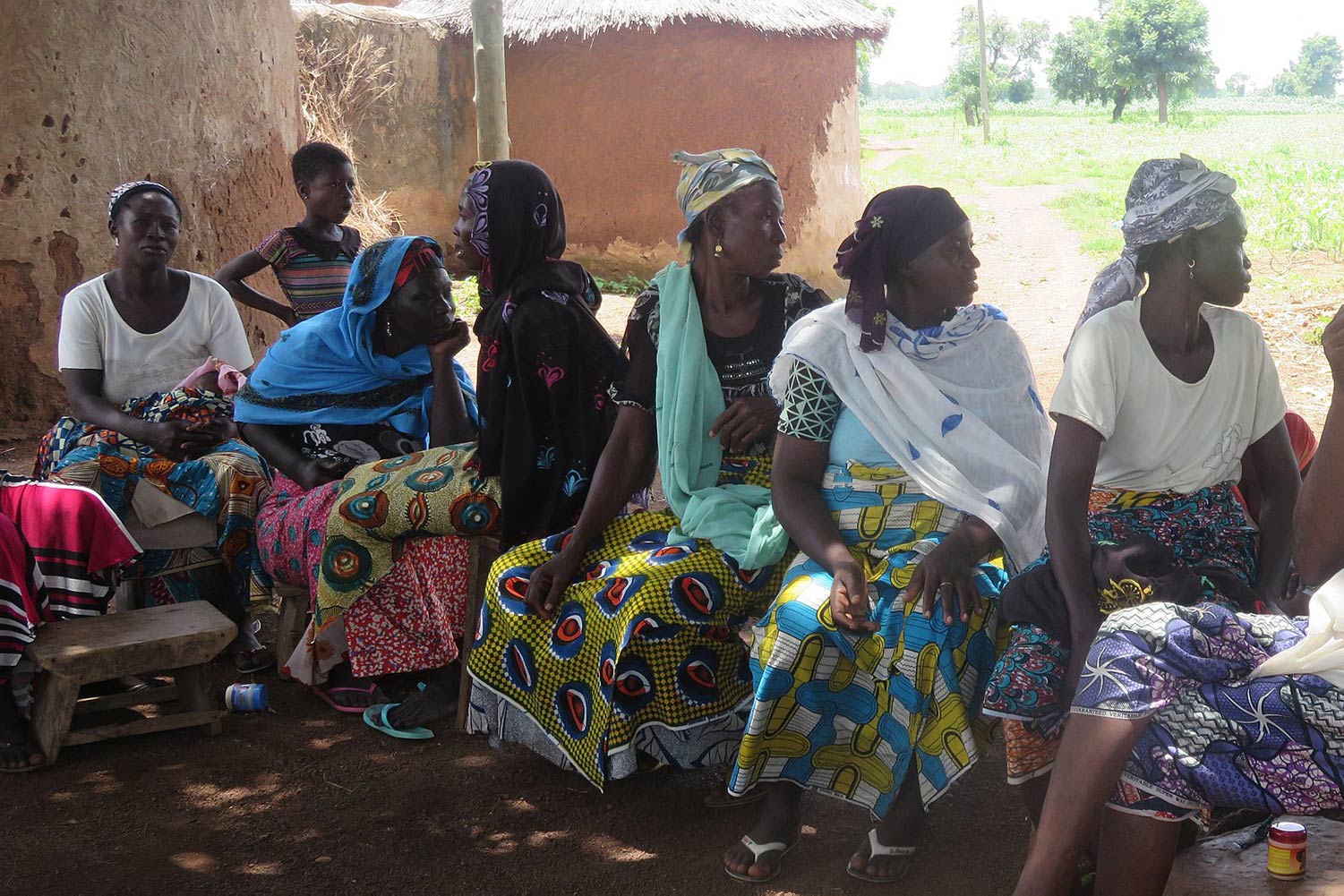 The pivotal place of feminine wisdom in Africa may surprise a good many outsiders! As one of my friends would always say, “women possess great wisdom which is valued and reinforced in African societies”, despite the stereotypes. In this blog post, I intend to give voice to the primacy of feminine wisdom in traditional knowledge production in Ghanaian culture – albeit neo-historically masculine in its decision-making and social depiction – and seek to buttress this exploration with future analysis of both African and other Indigenous cultures.

Perhaps, among all ethnic groups in Ghana (like the western world), men have “traditionally” been said to be the decision-makers. However, unlike western societies, this apparent male-dominance has also been traditionally tempered much like certain Indigenous Canadian cultures.  In Ghana, this is often shown in the expectation to first consult the “old woman”, referred to as “ewu” in Sεkpεle, “abrewa” in Akan, “mama” in Ewe and “pɔnyaale” in Dagaare. These four language groups are drawn from the north to the south of Ghana and portray the prevalence of this episteme regarding feminine wisdom.

Dagaaba folklore shows this image of feminine wisdom very poignantly. Gervase T. Angsotinge (2005: 23) recounts a Dagaaba story where the timely intervention of an old woman stops a hunter from revealing his last secret to his new bride who, unknown to him, was out to avenge her mother’s murder. The story goes that the hunter killed a bush-cow. The daughter of the cow then turned into a beautiful woman and agreed to marry the hunter, who was so enthralled by her beauty that he began to reveal all his secrets. If he told her all his secrets, his bride would have the power to kill him. He was about to have revealed all his secrets to her but for the timely intervention of an old woman in his home, who stopped him with the words: “Hold your peace. Thou shalt not reveal all thy secrets to a new bride”. Thus, discretion or restraint is often depicted as an eternal value conferred on men (the hunter) by “old women”.

More famously, the Queen-mother of the Asante (also called Ashanti, of the Akan ethnic group) chooses a candidate for the position of Asantehene (King of Asante). While Queen-mothers are so referred to because of the mother-figure of women, the Queen-mothers are queens in their own right. A Queen-mother is said to be the leader of the women, who ultimately become mothers of their people. What is more, there are female chiefs who are overlords of some Ghanaian communities, both traditionally and currently. Modern examples include Nana Kofi Abuna V of Essipon Traditional Area in the Western Region and Nana Amuah-Afenyi VI, paramount chief of Ekumfi Otuam, the hometown of the late former President Atta Mills. She currently works in the Ghana Embassy in Washington DC and enjoys significant Western media attention.

This depiction of the old woman (ewu, abrewa, mama, pɔnyaale) aiding men in decision-making has been famously catalogued in Ghanaian art. Wisdom is “personified as a female virtue to endow the elders with the prowess to adjudicate in intractable cases” (Okyerefo, 2019: 14), thereby predicating male decision-making on female acumen. True, the figurative usage of conferring with the “old woman” is applied in the actions of men adjudicating a case – usually rising in the midst of a case and stepping aside to confer with each other to build consensus. Nevertheless, customarily, women are also key decision-makers among peoples from all over Ghana.

The Evolution of Tradition

Given this role of women in Ghanaian culture, how then does male decision-making and knowledge production in traditional Africa enjoy so much pre-eminence when, at the same time, it is so reliant on female wisdom unless this view was based on a cultural, patriarchal myth that has gained currency for a long time?

This brings me to a key consideration that Victoria Schorr, of Open AIR, and I discussed at the Canadian Association of African Studies (CAAS) conference this year. What is seen as tradition is constantly evolving. We can not ignore the pre-slave-trade versus post-slave-trade dynamic of West African societies. There is no doubt that the transatlantic slave trade had significant impacts on West Africa, including Ghana. After significant, direct contact with Europeans, societies in the region have not been the same ever, especially after the extension of that era into the postcolonial period. Indeed, Boris Bertolt (2018: 3) opines that “coloniality of gender allows us to figure the oppression of non-European women in a long process that dates back to the fifteenth century with slavery and which resulted in the nineteenth century to the Europeanization of the planet. This adoption of European hierarchical structures in the colonies will disrupt traditional societies”.

Prior to direct trade with Europe – as opposed to earlier trade through ancient North African routes – many West African cultures had less stringent gender norms and even occasionally less strict gender binaries. Several cultures allowed women to be warriors, owners of large businesses, traditional leaders, and more. Famously, the final in a series of Asante uprisings against the British is the Yaa Asantewaa War of the 1900s (McCaskie, 2007). Yaa Asantewaa I was a great warrior-queen of Asante, who successfully led her people in a campaign against the British. The British had wanted to seize the Asante Golden Stool, the throne and symbol of the Asante State. The failure of the British to win this war – and thus also not steal the Stool – made the Asante a de-facto independent people until they became part of the newly created nation, Ghana, in 1957.

The fact, however, remains that when Europeans arrived, they often refused to deal with (or, at times, even speak to) women in such roles. At the same time, those who could make international connections would often prosper significantly, both financially and in terms of local power structures. In this way, women’s roles were increasingly marginalized. The protracted European expansion over a number of decades and the spread of Christianity and Islam dealt a blow to much of this “traditional” African culture, resulting in many feeling erroneously that strict gender norms are, in fact, traditional. The historic fluidity of tradition and norms is something of which many people, especially non-African feminists, are unaware. Even worse, many non-African feminists claim that these “traditional” African gender norms are a reason that Africans need to be “educated”, in semi-neo-colonialist terminology.

Women’s roles in knowledge production in Africa appears to suffer cultural repression due to the disproportionate gendered dominance men enjoy, fuelled by a colonial mentality, similar to many other places in the world. At the same time, African cultures are replete with stories celebrating feminine wisdom, strength, intelligence, and more. Herein lies the need to cast a critical eye on the accumulated wisdom of many African peoples, which has been taken for granted, in order to give the deserved credit to both men and women in knowledge production in Africa. This gendered traditional knowledge worldview itself asserts that feminine wisdom is fundamental to historically masculine decision-making, though this fact is often overlooked.

Thankfully, some vestiges of the precolonial gender norms persist. Both Dagaaba men and women continue to tell and perform traditional stories such as the hunter’s recounted earlier.  Even in my own childhood, my mother owned a coffee farm that my siblings and I helped pick coffee beans on during school vacations. This was one of the most tedious tasks I have experienced but one I also enjoyed, knowing it was our farm. The respect I have for every cup of coffee I enjoy today goes back to that experience! My mother’s privilege and my sister’s position as the Queen-mother of my village, Likpe Agbozome, are examples of the inability of Europeans to entirely obliterate the precolonial gender rights they sought to annihilate.

My blog underscores the need to explore the reality of tradition more fully by welcoming engagement with communities in the study of their cultural norms. It is only by respecting and working with communities that one can better understand why this feminine wisdom, while so valued on the one hand, has at the same time been undermined and even desecrated by neo-traditional and, one must add, colonial masculinity. Wouldn’t it be interesting, for example, to explore traditional decision-making in Ghana as a comparative study with Canadian indigenous traditions? As we now are beginning to slowly understand indigenous cultures on their terms, it is my hope that we can all learn from these traditions.