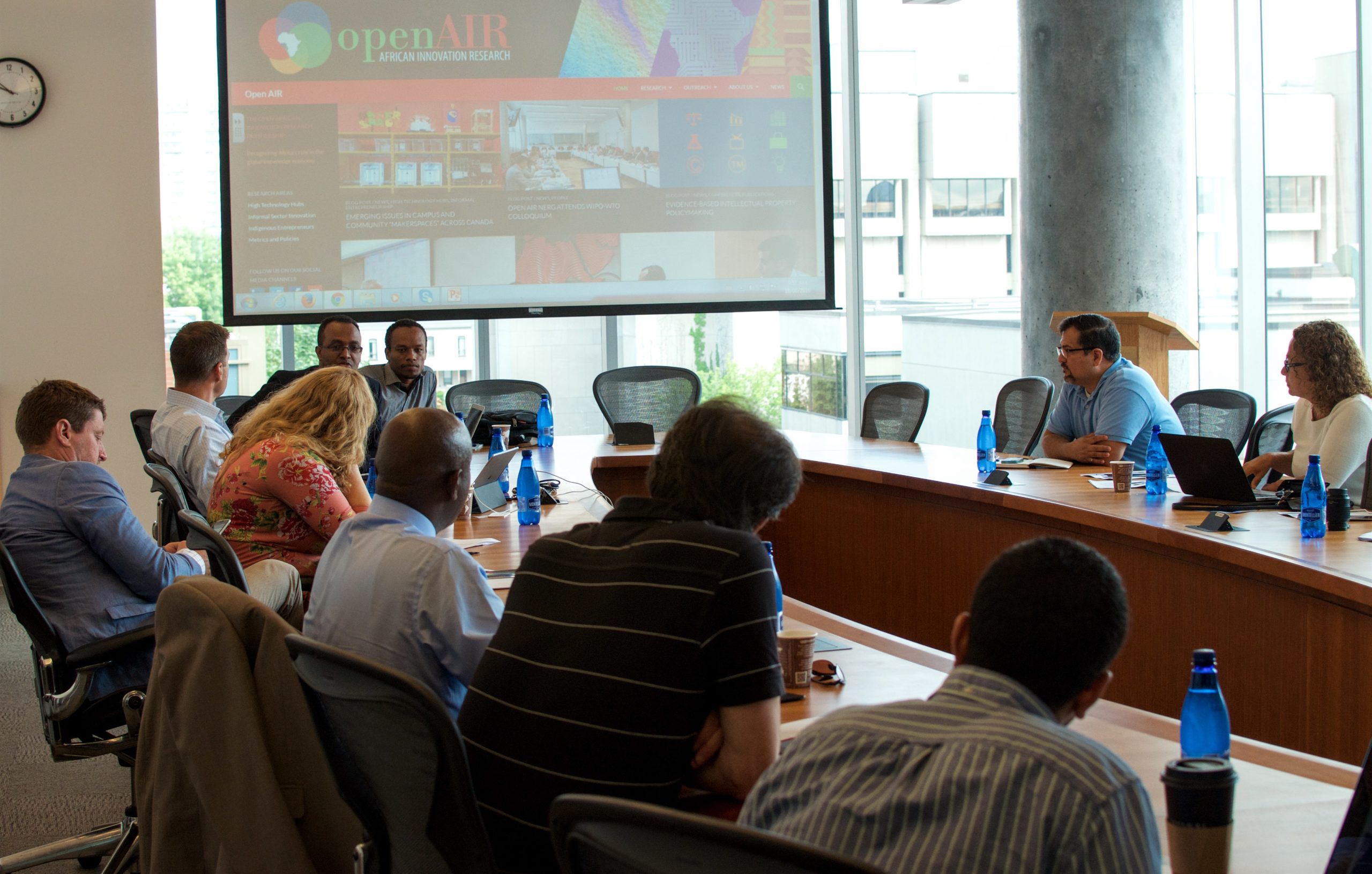 How the world evolves in the next decade (and beyond) may be dependent upon a new-age movement re-instilling age-old skills: the maker movement. In my ongoing research into the maker movement in Canada and South Africa (see earlier posts here and here), I recently co-hosted a workshop in Ottawa with attendees from the University of Ottawa, representatives of makerspaces in the community, and those with knowledge about makerspaces elsewhere in the world.

The purpose of the workshop was to help:

The workshop started off with Luc Lalande (the executive director of uOttawa’s Entrepreneurship Hub) and Hanan Anis (uOttawa engineering professor), exploring what is happening with makerspaces on campus, and in Ottawa, and the opportunities that exists for collaboration.

Lalande, explained the emergence of makerspaces in the Ottawa community. The spaces started as community spaces, with Artengine, and have since begun to pop-up in public libraries (Imagine Space) and public schools. Lalande emphasises the use of makerspaces in K-12 curriculum’s in pursuit of instilling the qualities of the maker movement in children, e.g. learn by doing, informal, DIY, collaborative, interdisciplinary, peer-led learning in a fun and empowering environment.

At a university level, Anis explained how students are a strong factor in the success of uOttawa makerspace, the uOttawa Richard L’Abbé Makerspace. Having students run the space encourages leadership and provides students with a sense of responsibility; they begin to want to see the space succeed. There is a collaborative and empowering community, with students coming together to create. 75% of the users already have ideas in mind and are just there for the tools. While it is great students come with ideas, Anis wants to see this change towards more interdisciplinary work; students using the space to come together and create or solve problems.

The Movement Across Regions

Open AIR researchers, Chris Armstrong and myself highlighted methods and findings from their ongoing research in South Africa in the second session.

I spoke of makerspaces as providing affordable access to tools and related-knowledge. While there is a strong maker culture in South Africa, there are many obstacles in forming and maintaining a makerspace, including: membership, funding, and outreach. An example at a university level is the University of Cape Town (UCT). There, students are have troubles getting support for their group, UCT’s Maker Society, from the university’s administration, unlike uOttawa, where the faculty expressly support the maker culture.

Armstrong, a visiting researcher from the University of Wits in Johannesburg, went on to discuss his findings from his study looking at makerspaces in Gauteng Province, South Africa. At a formal level, the University of Pretoria and the University of Wits have makerspaces but as they are in their early days of development there is still limited outreach. Tshwane University, however, has a hackerspace (a space that also contributes to the maker movement but focuses on tinkering with technology).  On an informal level, community makerspaces are beginning to thrive. Some, e.g. Geekulcha, are reaching out to high schools in pursuit of increasing both learn-by-doing and STEM education. Others are developing innovative, open source products, like House4Hack’s Morgan Reprap Printer.

We can of course look to other examples of cross-regional comparisons such as makerspaces in China which are largely driven by profit and IP protected innovation. Further, Open AIR studies are looking at the different models of hacking spaces, like Gearbox, mLab and iLab Africa.

No Regulation Better than Poor Regulation?: Legal and Regulatory Issues

This final session looked at whether current legal and regulatory issues facilitate or constrain the development of makerspaces. Tesh Dagne, an Open AIR researcher looking at the role of intellectual property (IP) in 3D printing, explained several scenarios of what policies governing 3D printing will look in the future. Each scenario however, will carry regulation and IP issues.

There is a disconnect b/w policy makers and the maker movement, in other words, there is a policy vacuum in Canada when it comes to makerspaces. So, how do we bring the issue of maker movement up the policy ladder?

Laurent Elder, a program leader for the International Development Research Centre (IDRC),  discussed whether or not the maker movement is a place where regulations should exist. Perhaps regulation matters, but it has to be used, or not used, carefully. For example, M-pesa is successful because of a lack of laws and regulations.

There is potentially much that Canadian “makers”, working in a predominantly formal economy, can learn from African makers, and vice versa, especially as the global maker movement evolves. The maker movement needs to be used to empower and benefit society. The DIY attitude is great, and in North America we can afford to have a job and go “hobby” on the weekend, but we need to use the movement to make a difference.

The workshop established three core challenges: (1) we need more and better information shared on campus; (2) we need to increase student engagement, interaction, and empowerment; and (3) we need to leverage mutual networks, assist each other is making connections. These challenges help inform next steps as uOttawa strengthens its role in the maker movement.