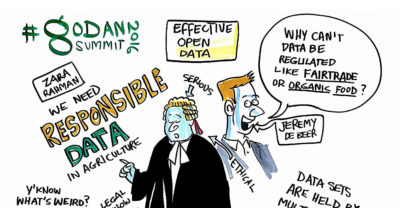 Open data has the potential to end global hunger. Farmers, government ministers, NGOs, and private firms gathered to collaborate on openness in agriculture in New York City at the Global Open Data for Agriculture and Nutrition (GODAN) Summit on September 16 and 17, 2016.

I had the privilege of representing Open AIR at the Summit as Professor Jeremy de Beer presented his study, Ownership of Open Data: Governance Options for Agriculture and Nutrition.

Open data describes datasets that are free to use, re-use, and re-distribute. Data is most useful when published openly. Open datasets can work with other open datasets, allowing new uses and providing insights for better decision-making. Open agricultural data such as crop yields, weather patterns, and market indicators can help farmers decide what to plant, NGOs to better direct development funds, and governments to better combat climate change.

Drawing from the openness movement’s ethos, open data promises to level the playing field. It imagines a world where smallholder farmers, agro-businesses, students, tech firms, and developing and developed countries have access to the same information by default. Given this potential, I was encouraged by the enthusiasm expressed by a broad range of actors. Several countries expressed commitments to open their government data and firms like Syngenta discussed releasing their data. Many of the start-ups at the summit showcased new uses for open data including blockchain-based agriculture logs. In addition, NGOs highlighted how open data can address poverty and help to end world hunger.

A number of challenges still stand in the way. Professor de Beer’s presentation highlighted the ownership issues facing open data proponents. According to international intellectual property (IP) law, data is proprietary by default. Open data relies on owners to publish their data using an open license. But licencing does not address all of the ownership issues with open data. Ownership rights to data are found in a number of IP mechanisms, including copyright, trade secrets, privacy rights, traditional knowledge, and prohibitions on circumventing Digital Rights Management (DRM).

In addition to legal factors, there are ethical dimensions to open data. Professor de Beer described how, “ownership rights, or the lack thereof, are a major factor in the power dynamics of open data for agriculture and nutrition.” When smallholder famers supply data to governments or firms, the law provides them with no legal right in the data, although many agree they hold a clear ethical right. Even if the data is licensed back to the farmers, its owner often retains the right to modify or withdraw access without the consent of the farmer.

Open Water, an excellent video released at the summit by GODAN, provides a model example of how to address this dynamic. The video introduces us to South African fishers who use the app Abalobi Fisher to log their catches and monitor weather conditions. The app, developed at the University of Cape Town, maintains the fishers’ ownership of the data while allowing them to share their data with various stakeholders. Practices like these could be encouraged through social certification schemes.

I’m very excited to continue the conversation at the annual International Open Data Conference from October 2ndto 8thin Madrid. Although GODAN has taken a leadership role in addressing ownership issues with open data, these issues are not confined only to agriculture and nutrition. I’m looking forward to exploring how ownership issues affect other fields within the open data movement. This is a new community for Open AIR, and we are curious to see how open data is being used in High Tech Hubs, Indigenous Enterprises, Informal Sector Businesses, and Measuring Innovation across Africa. I’m preparing a research trip to explore how Open Data is being used in Kenya and hope to connect with practitioners, policy-makers, and technologists at the IODC16 conference.