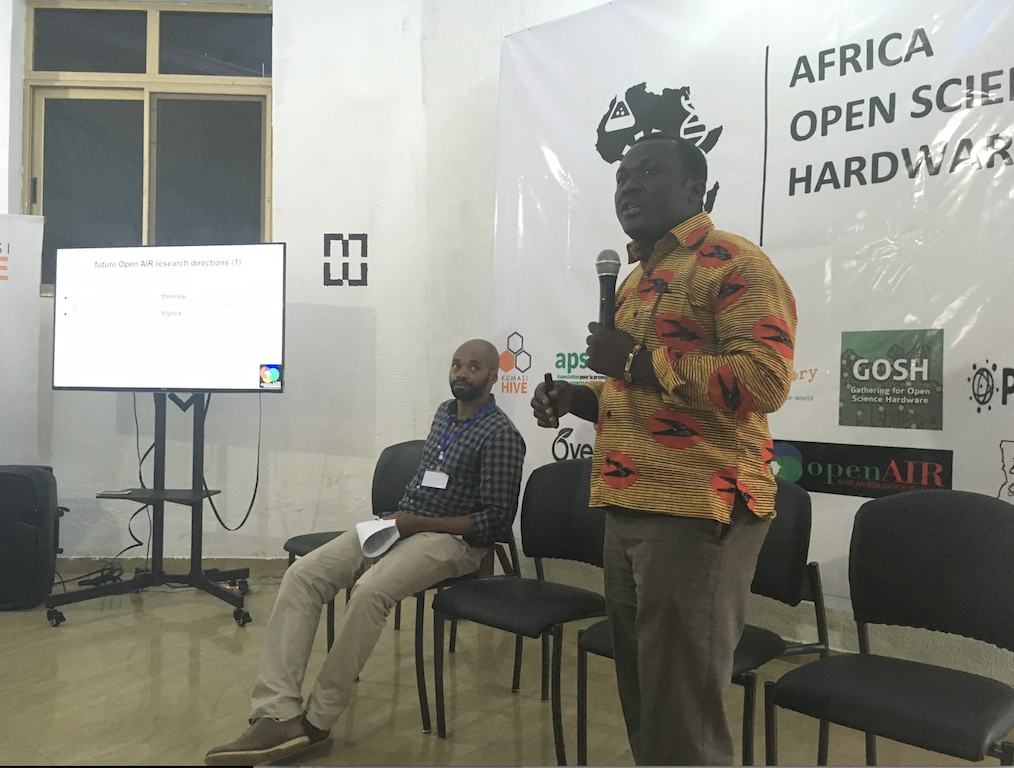 Open AIR was privileged to be a supporting partner of the inaugural AfricaOSH Summit, held 13-15 April 2018 at the Kumasi Hive innovation hub in Ghana’s second city – and home of the Ashanti people – Kumasi.

The global open science hardware (OSH) movement has built significant momentum in recent years, notably via the Gathering for Open Science Hardware (GOSH) event in Geneva in 2016 and its follow-up in 2017 in Santiago, Chile.

The Kumasi AfricaOSH Summit, framed by the ideals of the GOSH Roadmap, aimed to solidify the OSH movement on the African continent. Based on the reactions of those in attendance, AfricaOSH was a great success. Much of the power of the event came from its “quality, not quantity” approach: there were only about 50 participants, but the depth of African OSH expertise these people brought allowed the Summit to punch far above its weight. Among the many inspiring Summit presentations:

We as Open AIR, serving as both a financial and content supporter of the Summit, provided a panel discussion on our research into open innovation modalities, including OSH practices. In the panel, I (representing Open South Africa and Open AIR Canada) was joined by Kumasi-based Yaw Adu-Gyamfi (pictured above, of Open AIR Ghana), Outlwile Maselwanyane (in background above, of Open AIR South Africa) and Vipal Jain (Open AIR Canada). The panel covered:

We in the Open AIR team were able to forge valuable links with innovators in countries where Open AIR already has a presence (e.g., Cameroon, Ghana, Nigeria, Tanzania, South Africa), and also to extend the network’s reach through contacts with delegates from countries (e.g., Togo, Benin) where the network is not yet on the ground. We also began collaboration talks with representatives of key like-minded international networks and projects such as the Global Innovation Gathering (GIG), MakerNet,  São Paulo Lab, and the Agency for Open Culture and Critical Transformation.

Open AIR was part of the Summit’s breakaway sessions that brainstormed ways to add an African context to the GOSH Roadmap. These discussions, which have continued beyond the Summit, are being spearheaded by the AfricaOSH Summit’s co-convenors, Thomas Mboa Nkoudou (based in Cameroon and Canada) and Connie Chow (based in Ghana and US), both of whom are to be congratulated for pulling together this groundbreaking event. Also deserving high praise are George Appiah and his team at Kumasi Hive who, with a small budget but a huge amount of commitment, managed to convene an historic event that will no doubt be a key reference point for Africa’s OSH movement going forward. Open AIR looks forward to being part of future #AfricaOSH activities, and we wish the global GOSH community every success with its GOSH 2018 event, 10-13 October, in Shenzhen, China.