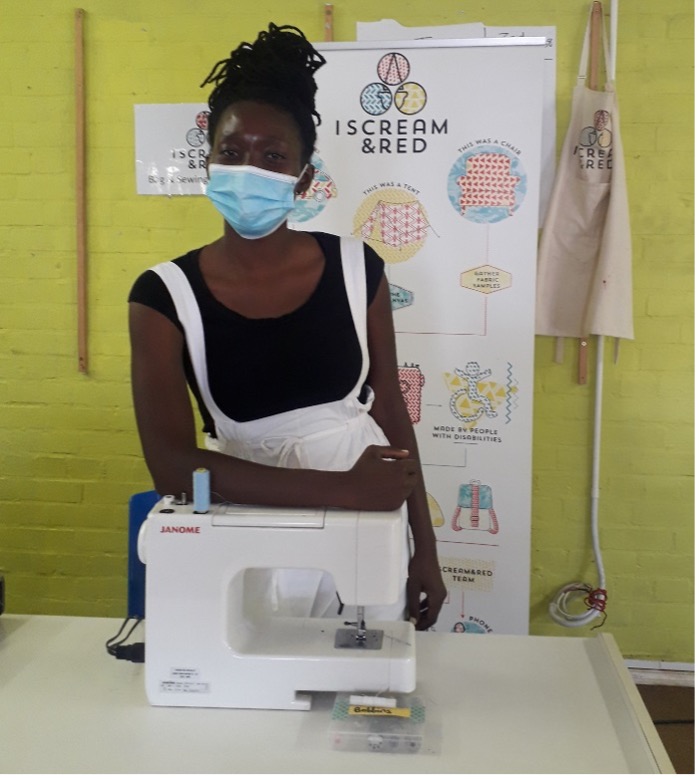 My ongoing Open AIR, Queen Elizabeth Scholar – Advanced Scholars (QES-AS), research project discusses the extent which South Africa’s copyright and design laws (IP laws) and makerspaces are gendered in a way that devalues women’s innovation. I am currently working with the Craft Design Institute (CDI) and the I-Scream and Red maker communities in Cape Town. The CDI is a non-profit company that provides an environment for designers and craft producers to leverage opportunities for development by offering product, business and market support. I-Scream and Red is a makerspace that trains persons with disabilities to sew planet friendly fashion items.

The maker movement presents the phenomenon of using shared spaces (makerspaces) to enhance technological and social innovation through hands on [Do It Yourself (DIY)] creation. It is characterized by innovation that often takes place in social contexts outside of the conventional structures of research and development, such as laboratories and departments in organizations.

The research is defined in the context of South Africa’s maker movement to reveal some realities of informal innovation by racialized/poor women. It assesses the contribution of women to innovation and the extent to which gender blind IP provisions contribute to the IP gender gap, gender disparity in innovation and pervasive poverty amongst racialized/poor women. By building on existing discourse, the research thus seeks a solution for the paradoxical situation of having great creative and artistic wealth but still experiencing pervasive poverty.

Why is the maker movement important for empowerment of women?

Despite the growth of the maker movement in South Africa and increased female participation in innovation, the IP gender gap and gender disparity in innovation persists. This is often described as a spillover from the “women tech gap”. The “women tech gap” refers to the underrepresentation of women in Science, Technology, Engineering and Mathematics (STEM) fields that are often referred to as “makers”.  For a long time, in Africa, social innovations that were not STEM related were side lined from the mainstream politics of technology, depriving them of crucial benefits such as financial support – critical for a continent with the lowest investments in Research and Development.

Makerspaces hold a great potential for inclusion of racialized/ poor women into the innovation paradigm by acting as a springboard into STEM. They do so by providing free or low cost working spaces which empower racialized/poor women to learn STEM skills like coding, soldering and woodworking. Makerspaces also play a big role in redefining the “maker” making it as broad as possible to include communities such as online communities, hackers, repair persons and persons whose innovations are not STEM related or even protectable by IP laws.

The preliminary findings of my research reveal that the gender disparity in innovation is partly caused by gender blind provisions in IP laws, which fail to reflect the innovative acumen of women. Even though IP laws do not contain provisions that blatantly discriminate against women, IP laws are gender blind for replicating some gender discriminative norms. Feminized innovations have been relegated to secondary status in IP laws which favour exclusivity rather than inclusivity and replicate gender discriminative norms. For example, cooking, fashion, childcare or innovations which are considered to be incremental, social or a product of collaborative innovation, receive less IP protection than innovations that are mostly associated with men like in the tech and software industries. It is notable that the feminization of some forms of innovation occurs regardless of the gender identity of the producer and may thus affect women and men. However, women, as the main producers of these innovations, are more likely to be affected. There is therefore a need for an IP system that is gendered in a way that recognizes and supports the myriad of informally organized women innovators.

As my research continues, I will explore multiple aspects such as how, if at all, gender inequality and marginalization can positively influence development by providing incentives for innovation, as is the case in makerspaces. (For a further discussion on this, see Ostry et al. 2014 pgs. 7-9)

This blog post was originally published by the South African Research Chair: Intellectual Property, Innovation and Development at the University of Cape Town. This blog post has been cross-posted with their permission. The original article can be read here.